Bestselling author Julie Cross teams up with international model Mark Perini to create You Before Anyone Else, a poignant and authentic contemporary YA novel and companion to Halfway Perfect

The supportive friend, the reliable daughter, the doting big sister: Finley is used to being the glue that holds everyone together. But while her sweet demeanor makes her the perfect confidant, her wholesome look isn’t landing her the high-paying modeling jobs, which are what Finley needs if she is going to reopen her mother’s dance studio.

Enter Eddie. He’s intense and driven, not to mention the life of every party, and he completely charms Finley. The last thing she wants is another commitment to stand in the way of her dreams, but when she’s with Eddie, their chemistry takes over and she can let go of her responsibilities and just be. After all, what’s so wrong about putting herself first once in a while?

Except Eddie is hiding a secret. A big secret. And when it surfaces, he and Finley are going to have to choose between their love for each other and everything else…

She’s also the author of Letters to Nowhere series, Whatever Life Throws at You, Third Degree, Halfway Perfect, and many more to come!

She’s a lover of books, devouring several novels a week, especially in the young adult and new adult genres.

Outside of her reading and writing credibility’s, Julie Cross is a committed–but not talented–long distance runner, creator of imaginary beach vacations, Midwest bipolar weather survivor, expired CPR certification card holder, as well as a ponytail and gym shoe addict. 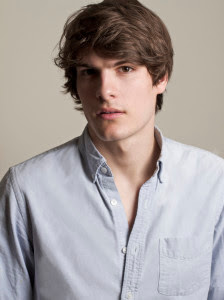 Mark Perini is a New York City based author debuting his first YA novel, Halfway Perfect. Additionally, Mark is a featured author in the NA anthology, Fifty First Times.

Mark began his career as an international fashion model when he was 18 years old, while simultaneously obtaining a business degree from Seton Hall University. He has a passion for traveling the world, and he’s made a blood pact with friends to see all seven ancient wonders of the world before he’s thirty. Four down three to go.

“What are you so afraid of?” Summer asks.

I take a sip of the beer Dima brought me a few minutes ago. “Oh, I don’t know, addiction, overdose, puking on some innocent victim’s shoes, random drug testing by the agency…”

Okay, so maybe I just don’t want to do it. Even if I should be in my so-called experimental phase.

I wouldn’t exactly label myself a rule follower, but I guess I’m just cautious. I haven’t always been this way. Not that I’ve done drugs, but before high school, I was all about ballet. Let’s just say I had a rep for being the sassy troublemaker. My mom being my ballet teacher may have had something to do with my behavior. My fingers immediately move to the cross dangling from my neck—I’ve only removed it a couple times over the last four years. Somehow, it’s always warmer than my hands.

I debate texting my dad to ask him if he’s done coke or molly. He’d probably tell me. But I wouldn’t want to freak him out. Seems like a conversation better reserved for a weekend visit instead of late on a Friday night when I could be too far gone to help, for all he knows.

I glance around the room and finally spot someone I know: my friend Alex and his girlfriend Eve. Alex and I did a big Calvin Klein shoot last year, and Eve was the photographer’s assistant. Actually, Eve used to be a model too, another preteen/teen phenom like Elana, who headlined that CK shoot along with Alex. My part had been fairly small, and still, that was my biggest job ever.

“Have you met Alex?”

Summer shrugs, grabs two more shots of vodka, and hands me one. “Like I would remember.”

I down the shot quickly and prepare to talk to Alex and Eve. Maybe they’ve done drugs and can advise me. But my buzzing phone distracts me. I pull it out of my purse and glance at the new text.

JASON: Yeah, it’s so weird to be home again. But I missed it.

My stomach flip-flops. He replied to my text. Hours later, but still…this could mean—

“Oh lord, you’re pathetic.” Summer is leaned toward me, reading over my shoulder. “That’s probably enough for you to live off of for another six months or so, right?”

I glare at her and shove the phone back into my purse.

“No comeback? Wonder why…” She pretends to be in deep thought. “He said he missed it. Not you. Cut the fucking cord already. It’s not healthy.”

If only it were that easy. When you’re in a relationship with someone for four years, you get so comfortable with that person. It’s daunting to start all over again.

I make my way across the room to see Alex and Eve, who are leaning against the back of the couch, more absorbed in each other than anything else.

“I heard Elana’s back from France?” Alex asks me, keeping his voice low.

“Yep, her and her mom. I think her mom is driving her crazy, but that’s to be expected. French Mama is driving me crazy too.”

They both laugh at the mention of French Mama, but I can’t take credit for that title. Summer made it up.

“I can’t believe her parents let her come back to New York,” Eve says.

Alex smiles at her. “You’re just upset that they’re here and not in France where we can hit them up for lodging.”

My gaze travels back and forth between the two of them. “You guys are going to France? Are you going for Fashion Week?”

Eve shakes her head. “Nope. I did the Prada shoot, and I’m done for good. Got tuition for next year covered.”

Even though Eve had supposedly quit modeling a few years ago, she pulled a one-last-job stunt last spring to cover her tuition at Columbia. She’s a photography student with a lot of experience under her belt.

Across the room, another beer pong player is being requested. This could possibly be the most adventurous thing I’m willing to do here. I turn to Alex and Eve again. “Well, good luck in Europe. I’m gonna go play beer pong.”

“Hey.” I grab Dima’s shirt sleeve. “You need another player?”

He looks me over, deliberating. “Sure. Be the new guy’s partner.”

“The new guy?” I glance around. What does that even mean? New to the party, like he just walked in? I’ve been here fifteen minutes.

“He’s new to the agency,” Dima says. “First casting, and he books some big job.”

“So we hate him then, right?” I joke. I turn around to head toward the game table and run right into a guy about my age with wild, dark curly hair and designer jeans.

“This guy,” Dima says to me and then turns to the new guy. “Got you a partner. Finley. She lives in the agency apartment downstairs.”

They exchange a look that says I’ve been mentioned before. I’m not liking that too much, but usually, I don’t come to these parties. Instead, I bang on the door at two in the morning to tell them to

stop thumping around like elephants. Maybe I got a bad rep.

While we wait for Dima to find a partner, I snatch two beers from a nearby cooler and offer one up to New Guy. “So, Dima said you’re new, but he didn’t say where you’re from.”

“Chicago…well, not in Chicago, but around it, you know?” he says.

Summer breezes past me but stops when she spots me holding the beer pong ball. “Beer pong? Oh, you wild animal…grrrr.” She holds up her tiger paws and growls at me.

I give her the finger and then turn back to Eddie. “I’m one of the girls who live downstairs.”

“One is too bitchy, one is too underage, and one is nice,” he recites, most likely quoting Dima.

This is exactly what I’m trying to escape tonight. “Dima called me the baby bear?” I’m secretly hoping he catches my reference to Goldilocks.

“No,” Eddie says. “He called you Finley Belton, but I added the nice part, because you brought me a beer. And it is just right, not to mention you’re talking to me instead of staring and whispering to other people about me.”

Points for his fairy tale knowledge, and I’m sure the whispering is the result of whatever big job he’s landed. Too many models at this party.

Eve tries to be Dima’s partner, but he refuses and tells Alex to play with him. Eve opens her mouth to protest, but Dima holds up a hand. “Don’t even. I know your type. You’ll engineer some fancy trick shots. No Ivy League players showing me up. I got a rep to protect.”

“Fine,” Eve snaps. “I’ll just stand here and look pretty. And I’m definitely rooting for Fin and…” She gestures toward the new guy.

Summer returns and stands beside Eve, both leaning against the back of the love seat.

I shoot her a glare and will my face not to heat up. So not cool.

Julie Cross and Mark Perini, along with Tasty Book Tours, are celebrating those who have taken the steps to Break the Mold on society’s expectations, like Finley, the heroine from YOU BEFORE ANYONE ELSE!  We are looking for anyone who would like to share their story and be entered to win a 2017 Erin Condren Life Planner!

Head over to fb.me/TastyBookTours and leave a comment with your story.  Feel free to share picture of your journey and use #breakingthemold at the end of your comment!