This year I was honored to be asked to participate in the Pasadena Loves YA Blog Tour and to host a Q&A with Ava Dellaria, author of Love Letters To The Dead. Be sure to check out the full interview with Ava by scrolling down.
Along with the Q&A there is also a giveaway of three books from any Pasadena Loves YA 2015 authors. For more information and to enter the giveaway just scroll down to the end of the post. 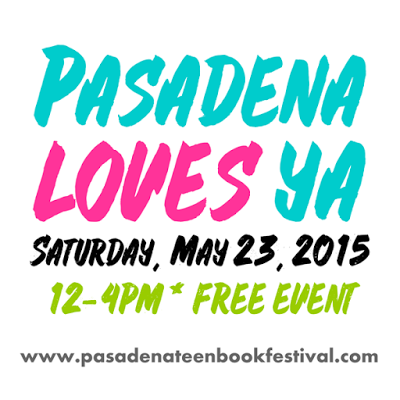 For those who haven’t attended this event before here are some of the important details…
When: Friday May 23, 2015 at 12 noon-4pm
Where: Pasadena Public Library, Central Branch, 285 East Walnut Street, Pasadena, CA 91101
What: Meet 20 YA authors / Panels & Book Signings / Giveaways and Refreshments / Free tote bags for the first 150 guests!

Please Note: Book sales by Vroman’s Bookstore will begin at 11am. Co-sponsored by Bridge to Books. No registration required, but we would appreciate it if you would post, share, tweet, and tell everyone you know about the upcoming event! Please use the hashtag #PLYA2015.

Q: Tell us about your writing process?

For me, first drafts are a process of discovery. When I started out writing Love Letters, I began with the concept and a few key story points, and I thought of the early stages of writing as spending time with the characters and getting to know them, learning to listening to what they wanted to tell me.

After I had finished a draft of the book, I began the process of shaping the story. On my next draft I focused on structure and narrative arch. I drew on the feedback of friends and family and rewrote the book many times before I began working with my agent and my editor—what I presented as a first draft had actually been rewritten countless times!

Q: What writers would you say influenced your writing the most?

I feel like I’ve been influenced, in some way, by every book I’ve fallen in love with. I have a background in poetry and it’s had a big influence on my prose. (I often start out a day of writing by reading some poetry—it’s a great reminder, always, of the possibilities of language.)

Stephen Chbosky, who was a mentor to me, was a big influence on my writing. At the time I was writing my first draft of Love Letters, I was reading This Is How You Lose Her by Junot Diaz and Welcome to the Goon Squad by Jennifer Egan. They are both marvelous masters with language, and helped to inspire me.

When I began working on Love Letters, I hadn’t setting out to write a YA book necessarily—to be honest I knew little about the genre at the time—but after I’d talked to my agent about it, he told me he thought the book should be published as YA, and I started educating myself in the genre. I read some of the classic titles likeSpeak by Laurie Halse Anderson and Looking for Alaska by John Green. Those books were real inspirations for me, and helped me a lot in writing my second (and third and fourth and fifth!) drafts of the book.

Q: In your book Love Letters to the Dead the main character, Laurel, writes letters to famous dead people as an English assignment. How did you decide which people Laurel would write to?

I started out with some celebrities that I myself loved and began researching others who I thought might be a good fit. As I worked on the book and got to know Laurel, I found that her character and the choices of people to whom she would write mutually informed each other. For example, when Laurel began writing to River Phoenix, I saw the evening that she and her sister, May, had first watchedStand By Me together, and the way that his particular innocence spoke to them, as they felt the first danger of their own slipping away.

I had originally started out with a wider selection of letter recipients, but in subsequent drafts of the book those who were no longer relevant to the plot fell away. The book traces the evolving connections that Laurel makes between her own life and the lives of the people to whom she writes, so as Laurel’s character and journey became clarified, so did the decisions about the people to include in the book.

Q: If you had been given the same English assignment as Laurel when you were in high school who would you have written to?

I’ve been asked this question a lot, but never with the “in high school” caveat, which is a great addition! I’d likely have written to Kurt Cobain, like Laurel does. I could also see myself having written to Janis Joplin, or John Lennon, or a number of authors I loved, like Kate Chopin or F Scott Fitzgerald.

Q: Fox 2000 has optioned Love Letters to the Dead. What would be your dream casting?

Yes! I feel very lucky to have gotten the opportunity to write the screenplay. I have had a wonderful time working with Fox 2000 and the producers at Temple Hill, and it was a really great to get to spend new time with the characters and to figure out how to tell Laurel’s story in a different medium. As for casting, I have faith in my producers! I thought they did an amazing job with casting for Fault in Our Stars, Twilight, and Maze Runner, and I’m really excited to see who they’d chose forLove Letters.