It’s been a while since I have done my last review so I am excited to share my review of The Girl You Left Behind by Jojo Moyes. BE AWARE: THIS REVIEW MAY CONTAINS SPOILERS. 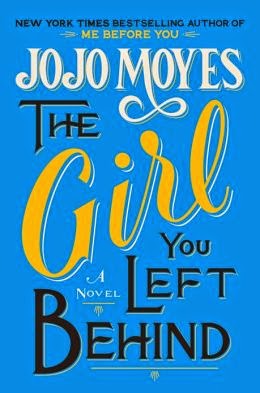 Summery: In 1916 French artist Edouard Lefevre leaves his wife Sophie to fight at the Front. When her town falls into German hands, his portrait of Sophie stirs the heart of the local Kommandant and causes her to risk everything-her family, reputation and life-in the hope of seeing her true love one last time.
Nearly a century later and Sophie’s portrait is given to Liv by her young husband shortly before his sudden death. Its beauty speaks of their short life together, but when the painting’s dark and passion-torn history is revealed, Liv discovers that the first spark of love she has felt since she lost him threatened…
Review: I really enjoyed this book. The story was really interesting and I liked how the two story lines connected through the portrait of Sophie.
Of the two story lines I have to say that I preferred Sophie/World War One storyline over Liv’s storyline. That is probably because I liked Sophie more and thought she was a more interesting character then Liv. She carries on with her life even through the hardships of the German occupation of her town and she is willing to do anything to protect her family. On the other hand Liv has seemed to shut down completely after the death of her husband. While Sophie is willing to give up the portrait in order to save her husband Liv, selfishly, refuses to give it up.
The one thing that I like the most was Sophie’s portrait, The Girl You Left Behind, that was painted by her husband, Edouard, before their marriage. I really wish that someone from the art department had painted it and used it as the cover for the book. I liked how for Sophie it represented the girl she was before the war and for Liv it represented her marriage to David.
One thing that bugged me was the ending to Liv’s story seemed very contrived and I really wish it had had a more realistic ending. The notion that Paul only discovered Edith at the very end of the trial seemed too convenient and just plain unrealistic.
Best Feature: Sophie. Of the two main characters I have to say Sophie was my favorite. Out of the two female characters Sophie was the strongest. She carried on with her life despite the German occupation and was willing to give up the portrait to save Edouard.
Worst Feature: Modern storyline. The only thing I liked about the modern story line was that it brought up the question of ownership of items stolen during wartime. I didn’t like the character of Liv and felt that the World War One storyline held it’s own without having a second story running parallel. Plus the ending of this storyline was too contrived for me.
Overview: Overall I thought this was a great book. While I didn’t particularly like the modern storyline or Liv I think that Sophie’s storyline definitely made up for it.