I am very late in posting this but better late then never. This post contains not only an excerpt from Nicole Jacquelyn’s new book Unbreak My Heart but a Top Five List with Jacquelyn AND a giveaway (hosted by Forever Romance). Be sure to scroll down to enter the giveaway as well as read the excerpt and Top Five List.

Unbreak My Heart by Nicole Jacquelyn

Add The Book On Goodreads 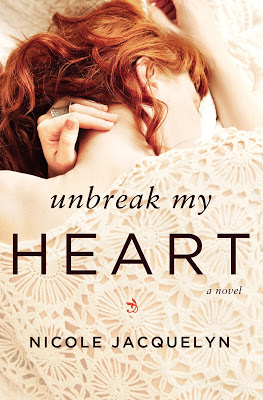 What do you do when your soul mate marries your best friend?

If you’re Kate Evans, you keep your friend Rachel, bond with her kids, and bury your feelings for her husband. The fact that Shane’s in the military and away for long periods helps-but when tragedy strikes, everything changes.

After Rachel, pregnant with her fourth child, dies in a car accident and the baby miraculously survives, Kate upends her entire life to share parenting duties. Then on the first anniversary of Rachel’s death, Kate and Shane take comfort in each other in a night that they both soon regret.

Shane’s been angry for a year, and now he feels guilty too – for sleeping with his wife’s best friend and liking it…liking her.  Kate’s ability to read him like a book may have once sent Shane running, but their lives are forever entwined and they are growing closer.

Now with Shane deployed for seven months, Kate is on her own and struggling with being a single parent. Shane is loving and supportive from thousands of miles away, but his homecoming brings a betrayal Kate never saw coming. So Kate’s only choice is to fight for the future she deserves – with or without Shane… 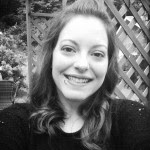 When Nicole Jacquelyn was eight and people asked what she wanted to be when she grew up, she told them she wanted to be a mom. When she was 12, her answer changed to author. Her dreams stayed constant. First, she became a mom, and then during her senior year of college–with one daughter in first grade and the other in preschool–she sat down and wrote a story. 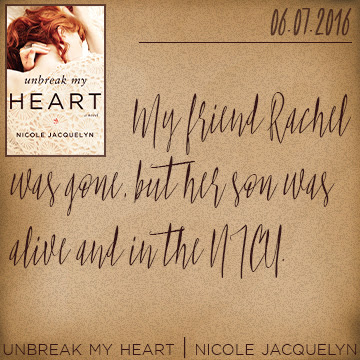 I don’t remember the drive to the hospital or even where I parked that afternoon. I can’t recall what the nurse looked like as she searched for Rachel’s name in their computer system or the walk toward the room where I waited for someone to speak to me.

The first thing I remember clearly is the white-haired doctor’s kind face as he sat down across from me, and the young chaplain’s small smile as he chose the chair to my left. Their words became a litany that I would hear in my dreams for years.

My Rachel was gone, but her son was alive and in the NICU.

“Is there anyone you’d like for us to call? Any family or friends that you’d like to be here?”

The question jolted me out of the fog that seemed to be getting thicker and thicker around me. Dear God.

“I’ll make the calls,” I answered, looking blankly at the wall. “Can I have some privacy please?”

“Of course. I’ll be right outside if you need me,” the chaplain answered, reaching out to pat my hand. “I’ll take you up to the NICU when you’re ready.”

The room was silent after they left, and I fought the urge to scream at the top of my lungs just to hear it echo around me. I understood then why people hired mourners to wail at funerals. Sometimes the lack of sound is more painful than the anguished noise of a heart breaking.

My hands shook as I pulled my phone out of my front pocket and rested it on the table in front of me.

It only took a moment before the sound of ringing filled the room, and I rested my head in my hands as I stared at the name across the screen.

“What? Why are you calling me?” His voice was confused, but I could hear a small thread of panic in the urgency of his words.

“I need you to come to Tri-City Hospital,” I answered, tears rolling down my face and landing on the glass screen of my phone, distorting the letters and numbers.

“Who?” His voice was frantic, and I could hear him moving around, his breathing heavy.

“Rachel was in an accident.” I sobbed, covering my face to try and muffle the noise.

“No,” he argued desperately, as I heard two car doors shut almost simultaneously. “Is she okay?”

I shook my head, trying to catch my breath.

“Kate! Is she okay?” He screamed at me, his anguished voice filling the room as I’d wanted mine to just minutes before.

“No,” I answered through gritted teeth, feeling snot running down my upper lip as I heard him make a noise deep in his throat. “She’s gone.”

He didn’t say a word, and less than a second later, the connection was broken.

I made my way to the NICU as quickly as I could, and within minutes, I was holding my new nephew in my arms. The nurses told me that he’d passed all of his tests with flying colors, and I was in awe as I sat down in a rocking chair, cradling him to my chest.

“You sure got a shitty beginning, little man,” I murmured against his fuzzy scalp, rocking back and forth gently. “I’m so sorry, buddy. You’re probably missing your mama and that warm bubble you’ve been in for so long. I can’t help you there.”

I sniffled, closing my eyes as tears rolled down my cheeks. My whole body ached, and even though I had that little boy in my arms, the whole day seemed like some sort of surreal dream, foggy in some parts and crystal clear in others. I wanted to hop up and take his sleeping, little form to Rachel, to tease her about the weird Mohawk thing he was sporting and make joking comments about how men always seem to sleep through the hard parts of life. I wanted to see her smile proudly at the sturdy boy she’d produced and grumble that I was hogging him.

I wanted everything to be different.

I hummed softly with my eyes closed for a long time, holding the baby close to me. It was quiet where we sat, nothing breaking up the stillness of the room until I heard someone open the door.

“There he is,” the nurse murmured from the doorway.

My eyes popped open to see Shane’s ravaged face just feet from me. He looked like he was barely holding on. I swallowed hard as his red rimmed eyes took in his son carefully before rising to meet mine.

“Is he okay?” he asked thickly, searching my face. I’d never seen him so frightened.

“He’s perfect,” I answered, my voice throbbing with emotion. “The nurses said he’s a rock star.”

He nodded twice, reaching up to cover his mouth with his hand, but before he could say another word, he was stumbling and falling to his knees with an almost inaudible sob.